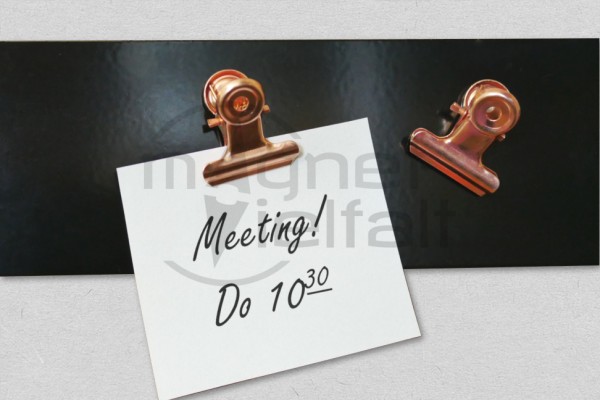 A magnetic letter clip in copper is particularly chic and practical at the same time.

A magnetic letter clip in copper offers the following advantages:

- easy attachment of notes or other objects

A large number of different objects can be attached to a ferromagnetic ground with a magnetic letter holder. Easily add or remove notes such as memos or shopping lists to a magnetic bar, a memo board, or a whiteboard.

Of course you can also use other magnets, such as pin magnets for attaching notes. However it is different when thicker objects such as for example thicker cardboard has to be attached. Fastening with a standard magnet does not work with thicker objects because of the higher distance between the magnet and the base. A magnetic letter clip solves this problem. Objects which should be attached such as for example stronger cardboards are not clamped by the magnet but by the clip. The clip has a capacity of up to 13 mm and thus offers sufficient mount even for thicker cardboard and other objects.

A further advantage of a magnetic letter clip to other magnets such as memo magnets or pin magnets is the simple handling. While the complete magnet has to be released from the base in order to fix or remove single sheets it is sufficient to open the clamp of a magnetic letter clamp in copper by easy push. Depending on how strong the magnetic strength of a magnet is this point can be very important.