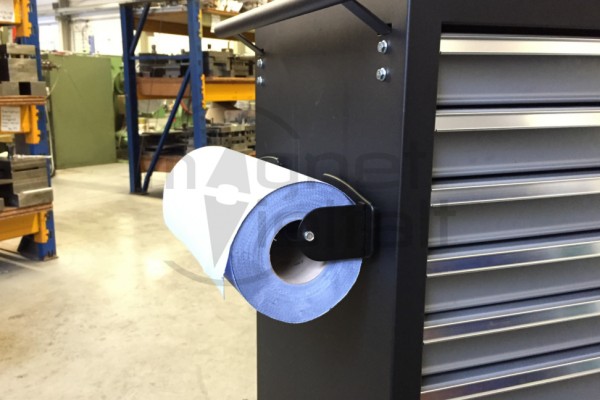 Rolls always ready to use and easy to roll with a magnetic paper towel holder.

With a magnetic paper towel holder you can attach rolls, such as paper rolls, stretchfilm, wrapping paper and many more to any iron surface. The rolls can be fixed exactly where they are needed. On a factory car, on machines or shelves. In addition the rolls are particularly easy to unwind.

- Holder for various rolls on any surface of iron

- 2-part therefore extremely flexible for almost every width of rolls

- can also be used separately as a holder for various objects

A magnetic paper towel holder consists of two parts. So you receive two identical holders. This has the great advantage that the holder can be used very flexibly. The magnetic paper towel holder is suitable for almost any width of the roll because the holder consists of two parts so you can determine the distance between the two holders and thus also the width of the roll itself.

However the magnetic paper towel holder can not only be used as a 2-part holder for the horizontal mounting of rolls. Vertically the holder can also be used for mounting smaller rolls or also quite other objects such as clothing, bags and various other objects.